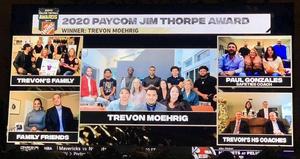 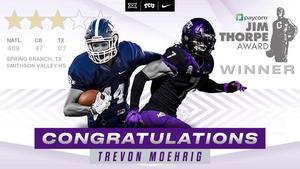 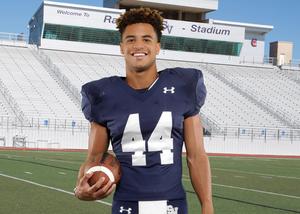 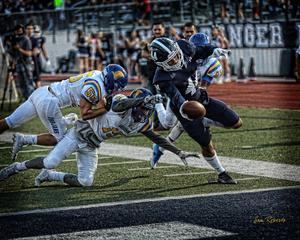 Dreams do come true. Just ask the Smithson Valley High School graduate who made headlines and history recently. Through dedication, a consistent work ethic and determination, Trevon Moehrig continues to reach for the stars.

Jan. 13, 2021 - With family and friends including his Smithson Valley High School coaches and teachers watching, Trevon Moehrig, a 2018 SVHS graduate, was named the 2020 Paycom Jim Thorpe Award winner, Jan. 7. The announcement was made during the virtual Home Depot College Football Awards on ESPN.

The former offensive player, #44, at SVHS, Moehrig, 21, has made history for his college team, Texas Christian University, as the first defensive back from TCU to receive this award. He led nationwide ballots in the closest overall voting since a tie for the award in 1987.

“NCAA football is the highest level of football for individuals aged 18 to 22 in the world,” says Larry Hill, SVHS athletic coordinator. “To be honored as the best at your position and thus the best in the world for your age group is obviously rare.”

While Hill acknowledges his former player’s rare ability as an athlete, he explains that what sets him apart from others with the same ability is his willingness to work hard.

“He separated himself by his practice habits, attention to detail and allowing himself to be coached,” says Hill. “Many premier athletes do not possess those traits because they’ve been able to get by all their lives without having to have it.”

Currently a junior at TCU, Moehrig announced that he will be entering the 2021 NFL draft. He is ranked as the No. 21 overall prospect and the top-ranked safety heading into the draft.

“Ever since I was a kid, I dreamed of playing in the NFL and taking care of the ones I love most,” Moehrig posted Jan. 2, on Twitter. “After much prayer, thought and talking with family, I’ve decided that it is best for me to forgo my senior season and enter the 2021 NFL draft.”

With two semesters remaining to complete his courses in interdisciplinary studies, Moehrig plans to earn his college degree from TCU.

Considered one of the nation’s top collegiate sports honors, the Paycom Jim Thorpe Award is given to the best defensive back in college football based on performance on the field, athletic ability and character. The award was established in 1986 and is named after history’s greatest all-around athlete, Jim Thorpe. Thorpe was a running back, passer and kicker but also stood out as a defensive back. He played professional baseball and won Olympic medals in the decathlon and pentathlon.

-On Jan. 2, Smithson Valley High School alumnus Trevon Moehrig was named the 2020 Paycom Jim Thorpe Award winner. His family along with several SVHS high school coaches were on hand for the virtual presentation.