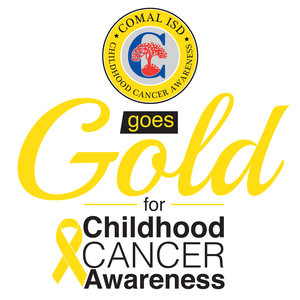 Comal ISD has a tradition of Going Gold every September in honor of Childhood Cancer Awareness, and that tradition continues this year.

On Friday, Oct. 9, a special dedication is scheduled at Arlon Seay Elementary in memory of Rachael Chaffin. Chaffin attended ASES and was diagnosed with rhabdomyosarcoma in the summer of 2013 before she began the sixth grade at Spring Branch Middle School. She battled the disease for almost two years, returning to school which she loved whenever she could. She passed away in April of 2015.

She started a team, Kicking Cancer with Ray Ray, in 2014, with 12 friends and family members who shaved their heads in support of the St. Baldrick’s Foundation, which she discovered gives every dollar raised to childhood cancer research. Her team raised almost $6,000 that first year and followed with a larger event in March 2015 at SBMS where 20 people shaved their heads including the school’s principal.

SBMS continues to raise funds for  St. Baldrick’s in Chaffin’s memory annually with head-shaving fun and more. Details for this year’s campaign are still being finalized.

The district also remembers Justin Easterling who was diagnosed with acute myeloid leukemia in 2015, a day after he completed the fifth grade at Kinder Ranch Elementary where his mother, Keiba Easterling, teaches. He fought for 11 months and passed away in 2016. His passion was making movies, and he dreamed of being a film producer and animator.

With a ready smile, Justin remained positive throughout his fight, and his mom encourages other parents whose child receives a cancer diagnosis to do the same. “Never give up hope,” she says. “Just don’t.”

Rachel and Justin continue to inspire students and parents with their courage and their smiles. They are just two reasons why it is important to raise awareness and give hope to those who may be fighting today.